Ho Chi Minh, the nationalist leader, and prime-minister of Vietnam during the period, led the communist forces based in the north of the country to a victory against the French in 1954. Acting as the face of Vietnam, with high education and being a polyglot (French, English, Russian, Cantonese, Mandarin and Vietnamese), Ho Chi Minh participated in the Geneva conventions that led to splitting the country into communist North Vietnam and pro-American South Vietnam. He became the President of the Democratic Republic of Vietnam (North Vietnam) in 1945.

During the President Eisenhower administration, the Cold War anxieties dictated that the whole Southeast Asia region is in danger of being occupied by communists. The piece of resistance was believed to be South Vietnam: if this region would fall, the rest of the countries in the region would fall as by the domino effect. President John F. Kennedy took office in 1961 and pledged not to allow South Vietnam to fall into the hands of communism.

With a communist government in the north and a democratic government in the south, the country was split in two, at the 17th parallel north of latitude, and the tensions rose. A full scale war between the two countries emerged due to a series of events which included not only the Vietnamese, but leaders of USA, Australia, and other nations. These two countries were divided by a demilitarized zone, or simply DMZ, which acted as a buffer.

The Vietnamese Demilitarized Zone was a demilitarized stretch of land situated approximatively one hundred kilometers north of the city of Huế, in the Quang Tri Province. It stretches from the border of Laos to Ben Hai River, which enters the South China Sea at 17 degrees N latitude.

The area that runs 5 km on either side of the border was declared a demilitarized zone. The area was active between 1954 and 1975 while it acted as a buffer between the South and the North. Ironically, the DMZ became one of the most militarized area in the world, with 7 tons (!!) of bombs per person being dropped, according to our guide.

The whole stretch of 10km is now covered in rice fields and it look very picturesque. Unfortunately the wounds of the war are still visible through underdevelopment, craters, and very young vegetation. The Vietnamese government managed to remove a big part of the bomb shells, but it is still not recommended to wander the stretch of land called as “the death zone“.

As far as we managed to gather information, there are 72 memorial cemeteries in this area dedicated to the troops from the North. It seems, that there is only one for the troops that fought for the South, and it is located in Saigon city. Not much is left from the history except some memorials and the iconic Ben Hai river bridge, which is painted 50% in the color of the North, and 50% in the color of the South.

On a personal note, I believe a trip to the DMZ is worth a try from Hue, even with a 2 hour drive. The landscape is now full of life compared to the photos that we see online. The local people are now planting the fields, and most of the unexploded bombs have been taken out. The best would be to combine this with the Vihn Moc tunnels which are 30 minutes away from the DMZ. 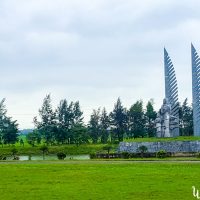 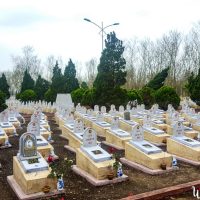 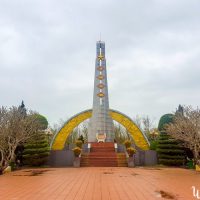 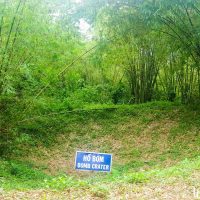 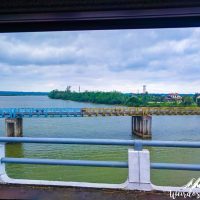 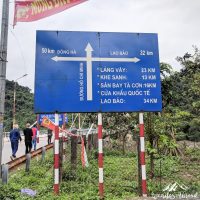 The Khe Sanh Combat Base was an American army base situated on top of a 600m hill, with a great position for defense and attack. Khe Sanh is the name of the valley surrounded by these rolling mountains. The base and air-strip is located approximatively 23km away from the DMZ. After 5 months of intensive and exhaustive battles, with many casualties on both sides, the Vietnamese Liberation Army succeeded in taking over Khe Sanh military base.

On our visit, we could observe again that the vegetation around is very young due to the heavy bombing that took place in the area. The complex is currently under-developed and with little to show to the visitors, but the past is still embedded into those fields and hills. The whole land can be walked upon, since it has been cleared of unexploded bombs. We visited the military equipment that is still exposed: helicopters, tanks, and airplanes (Huey, Chinook, C130 and tanks, for the connoisseurs); we got a glimpse at the life in the trenches of a military base.

Even if the buildings of the military base were completely destroyed by the American troops upon departure, the airstrip, military equipments, spectacular mountain scenery and rugged jungles make it worth going. The chill of this place is definitely embedded in the hill and everything around it.

Little anecdote: a young couple came here to do wedding pictures in front of the planes and tanks…

The Khe Sanh military base is definitely worth a visit, and I would include it in every tour of the DMZ. It takes a minimum of 1h to visit it, and you can actually spend half a day there. Trips from Hue are available and I highly recommend it. 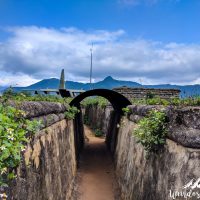 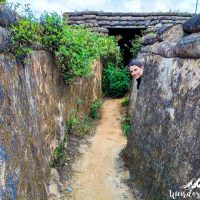 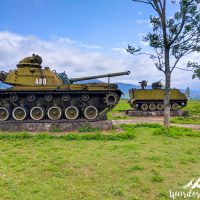 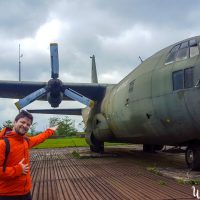 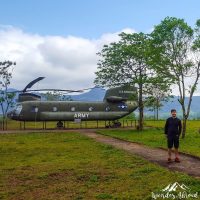 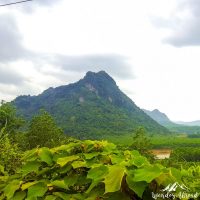 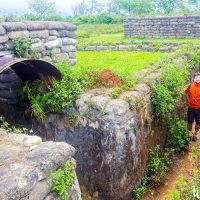 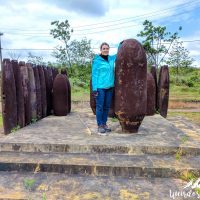 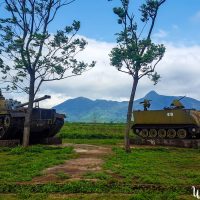 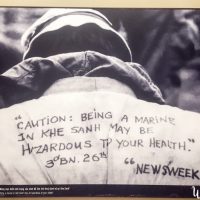 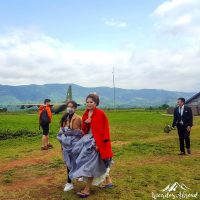 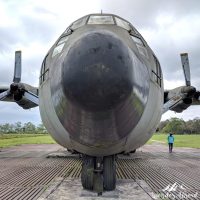 The Vinh Moc Tunnels are located in the vicinity of the DMZ, in central Vietnam. The tunnels were bomb shelters predominantly aimed for civilians, unlike the famous Cu Chi tunnels near Ho Chi Minh City, which were aimed at combat. The complex of tunnels of Vihn Moc is highly impressive. It represents the remains of a coastal North Vietnamese village that literally went underground in response to unremitting American bombing.

Using only primitive tools, 7000 workers managed to dig out a network of 1045m of underground passages in about 18 months. The local soil (clay) with limestone made it possible to dig deep into bomb-proof levels. The tunnels have been constructed on three different levels, due to the heavy attacks by the American troops: teh improved bombs could penetrate the soil up to 10 meters.

The whole village was living in these narrow tunnels, with medical area, meeting room, toilets, sleeping areas, and even a maternity. During the war there were 17 babies born inside the tunnels. Luckily springwater was accessible through wells. They barely got to see the sunlight until the war was over. The tunnel structure gave them a security from the bombing that were pouring on top of their heads. The inhabitants only ventured outside to plant and manage their fields, or what was left of them.

The Vinh Moc Tunnels were the cherry on the cake for us. These tunnels shows in which conditions the Vietnamese village had to live in order to survive the extreme bombing. I recommend including this on your to do list when you are in the area of Hue. 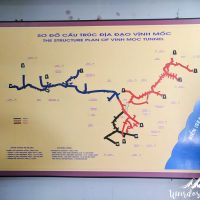 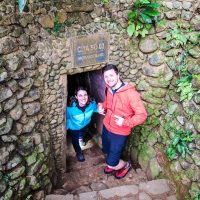 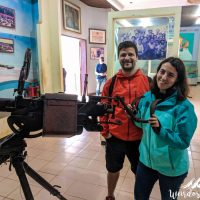 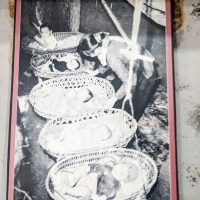 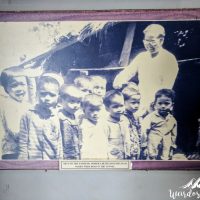 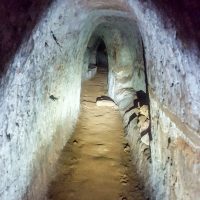 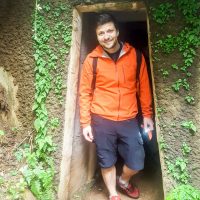 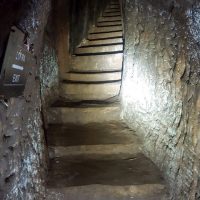 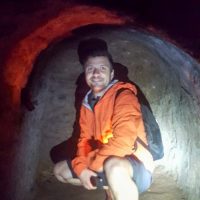 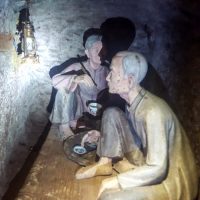 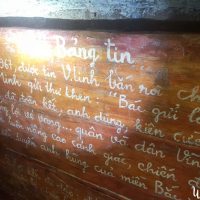 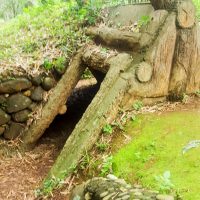 Our tour from Hue

We booked the DMZ tour with DMZ Tourist Information Centre ( http://dmztic.com/ ) directly at their counter office. They were helpful and the price was fair: approx. $20 per person as of March 2018.

The basic DMZ tour has the following stops on Highway 1 and Highway 9:

The sightseeing ends around 4pm and after 2 hours of drive back to Hue, we finish the complete the tour at 6 pm. It is definitely a full day.

Ha tien – From Vietnam to Cambodia

So here we are with a sleeping bus booked from Saigon to Ha Tien! Sleeping bus in Vietnam is not to be confused with a “couchette” bus. It means it is not exactly a mattress but a half lying seat. Still not too bad. W

END_OF_DOCUMENT_TOKEN_TO_BE_REPLACED

We walked around our neighborhood to discover a bit more Saigon… well it’s a very busy city! Somehow, because the streets are larger than in Hanoi, the flow of motorbikes and cars can be very impressive!

END_OF_DOCUMENT_TOKEN_TO_BE_REPLACED

In order to enjoy fully the lovely Hoi An you need to take the time to enjoy its hidden gems. And they are quite a few! In the Old Quarter most of the places are a bit over-priced (coffee shops, restaurants, tailors, hotels, etc).

END_OF_DOCUMENT_TOKEN_TO_BE_REPLACED

3 days chilling in Hoi An

I’ve heard many times about Hoi An in the past and I knew we would need to spend a few days in this place. Spoiler alert: we loved it! But not for the reasons one might think. Hoi An, which means the “peaceful meeting place” …

END_OF_DOCUMENT_TOKEN_TO_BE_REPLACED

Riding from Hue to Hoi An

We grabbed the motorbike in the morning in Hue and left our bags with the company. They shipped our bags by bus. When we arrived in Hoi An, we called the Agency and 10 minutes later someone came at our HomeStay…

END_OF_DOCUMENT_TOKEN_TO_BE_REPLACED

The city of Hue: sight-seeing, shopping and food

Hue, the seat of Nguyen Dynasty emperors has its own distinct charm. From our first day in Hue we really appreciated the unique atmosphere that the center of the city brings.

END_OF_DOCUMENT_TOKEN_TO_BE_REPLACED

The Imperial City of Hue

END_OF_DOCUMENT_TOKEN_TO_BE_REPLACED

We left Ninh Binh on time (22h30) by the Reunification Express Train. This train runs from Hanoi to Ho Chi Minh City, reuniting the North and the South (1726 km!), and stopping in Hue …

END_OF_DOCUMENT_TOKEN_TO_BE_REPLACED

Trang An and Hua Lo – King Kong and Emperors

Our last day in the Province of Ninh Binh before experimenting the night train in direction of Hue. Today we decided to ride towards the North. 10km away from Tam Coc is located …

END_OF_DOCUMENT_TOKEN_TO_BE_REPLACED

Tam Coc means “Three Caves” because one of the main attractions here is a boat tour that leads you through rice fields, limestones rocks and… 3 caves!

END_OF_DOCUMENT_TOKEN_TO_BE_REPLACED

Yesterday we walked mainly around the Old Quarter so today we decided to explore further away. Starting with the West Lake and its Pagoda: Chùa Trấn Quốc. The weather was pretty warm and the sky...

END_OF_DOCUMENT_TOKEN_TO_BE_REPLACED

The Hanoi Train Street, a Must-see in Vietnam

An interesting street came to our eyes during one of our random walks through the Old Quarter of Hanoi: the train street. This street is unique due to its positioning between residential buildings…

END_OF_DOCUMENT_TOKEN_TO_BE_REPLACED

One thought on “From Hue: DMZ tour and Vinh Moc tunnels”