Trang An and Hua Lo – King Kong and Emperors

It was our last day in the Province of Ninh Binh before experimenting the night train in direction of Hue. Today we decided to ride towards the North. 10km away from Tam Coc is located Trang An. The first time we heard about it was 3 days ago in the bus from Hanoi to Ninh Binh: the tour guide was proudly explaining that this was the film set for the last (?) King Kong movie! So if that rings a bell to some of you, this is it! Spoiler alert: we did not go to the King Kong island, but we visited some caves – woop woop!

Tràng An Scenic Landscape Complex is a UNESCO world heritage site and the only way to see it is by actually going on a boat tour. We were a bit afraid when we arrived there because it was packed with tourists and insanely organized. With music playing in speakers and different lines to queue, it reminded me of Disneyland! Not the best first impression. You then have to choose between 3 well-defined circuits; hoping we would avoid some of the crowd we choose the one that excluded the King Kong film set but included 9 caves and 2 temples. We then jumped in a boat when we had a chance (the boat system was a bit obscure to us) and had to wait a few minutes until we could fill up the boat with more people heading for the Tour 1. Bingo, not that many people are interested! Luckily, we ended up with a lovely French couple who were at the end of their 3 month trip in SE Asia and in the middle of a year-long world tour… reminds you of someone? 🙂

After the departure, the river was as crowded as expected. Luckily most of the boats were indeed doing a different circuit, many Vietnamese people stopping at other temples to bring their offerings. Soon enough we were peacefully discovering the spectacular landscape. Again, I apologize as it is as hard to describe the magnificence of the scenery as it is to capture it in pictures. We did our best but our amateurism would not allow us to share the emotions inspired by the environment. 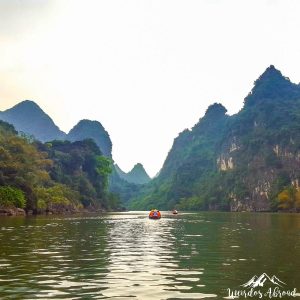 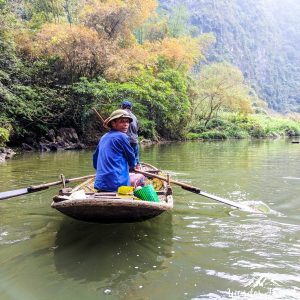 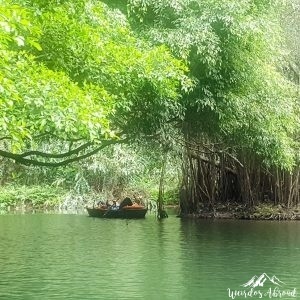 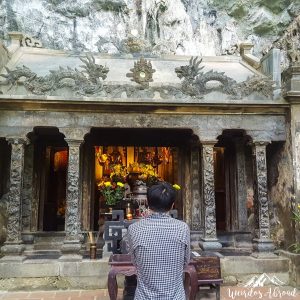 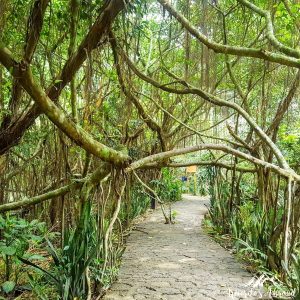 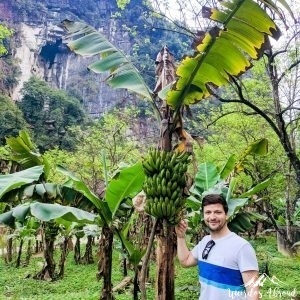 As I said previously the tour we took included the visit of 2 temples and, more impressive, the crossing of 9 caves from 100 meters long up to 320 meters! Mind your head!! It is crazy to think that those caves have been shaped by water within millions of years! Stalactites of various shapes and textures offer a unique setting and involving quietly by boat through this uneven, untouched tunnels is an incredible experience. Our “captain” was also much nicer as the one we had the day before as this boat tour is much more regulated (they are not allowed to ask tips for instance, even though we did give him one as he really did the extra-mile to please us). All in all, even though it is a Disneyland kind of organization, we had no regrets at all having done it and would recommend it to anyone passing by there!

A funny anecdote: on our way back we were floating next to a boat full of young Vietnamese boys who preferred to focus on playing cards (for money) rather than enjoying the landscape… why not … their choice. 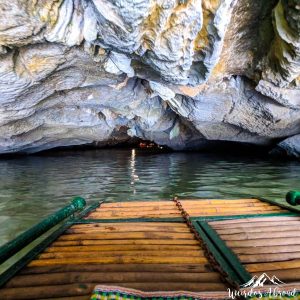 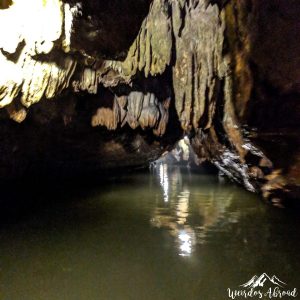 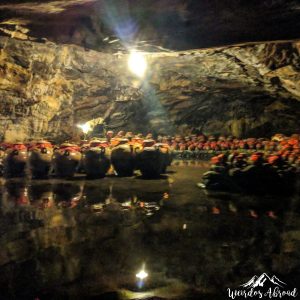 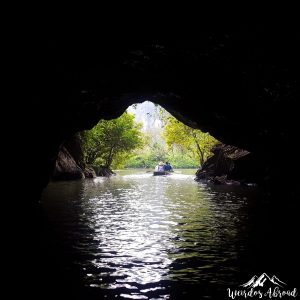 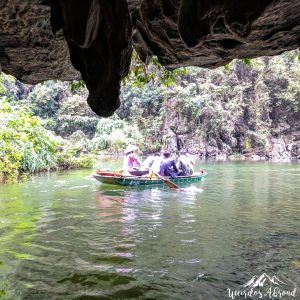 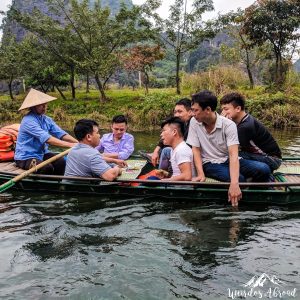 Later on, we followed the French couple to a place that was recommended to them: the old Trang An situated just 2km away. It was recently renovated and opened to public only a year ago so it is not yet crowded with tourists. Unfortunately it was closed (we found no one who could explain us why) which is a pity because it looked fun: a staircase shaped like a dragon going up the hill where we assumed the panorama would have been great.

Anyway, we continued the road up to Hua Lo, the former Imperial City… a big empty space with some temples and small palaces to visit around. We visited the 2 main ones and declared it a day. 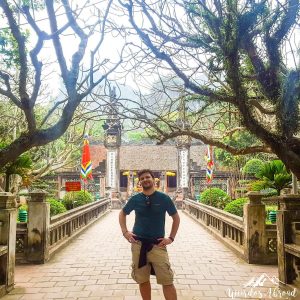 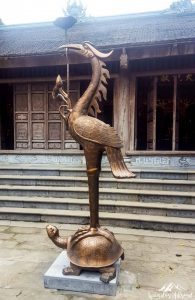 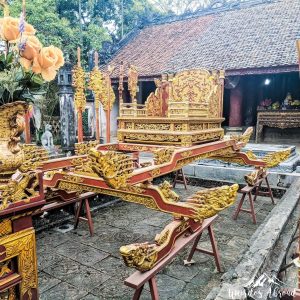 It was time to head back to our hotel, grab a beer (priorities), grab our bags and take a taxi to Ninh Binh where we would meet our new friends for dinner before heading to the train station.

In the meantime …  we had a crash. While crossing a village a scooter literally jumped in front of us coming from a perpendicular street and, as it is a custom there: turning without looking. Silviu managed to break but a small rain had made the floor slippery and we fell. Luckily we were not going fast so no damage! More fear than harm, the scooter and us escaped with only a few scratches. I put below some pictures of us happy on the scooter because that’s what we express: happiness! 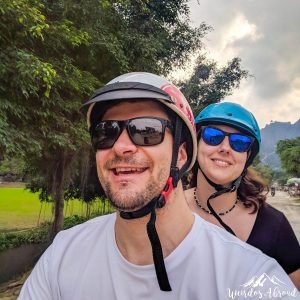 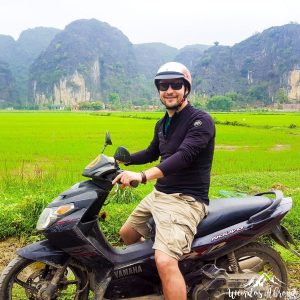 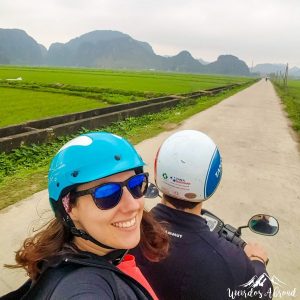 In the evening we met our friends at their hotel and followed a recommendation to a local restaurant. It was indeed packed with Vietnamese people, huge, dirty and noisy tables. On the menu: eels, catfishs, carps, turtles, frogs, snails, chicken and goat… we played it safe and opted for the goat, which is a local specialty (there are selling BBQ goats by most of the roads). We shared a grilled goat and a lemon goat; the latest was our favorite because you could prepare in springrolls (DIY style), which was very good. We also ordered fried sweet potatoes, but they were a bit weird as it was indeed sweet potatoes but stuffed in a fried dough… And we added a “crab soup” that came with rice, which was another lost in translation classic scenario: no crab around but a broth with green vegetables (?) that you pour on the rice; it was actually pretty good! A very local and popular restaurant, a bit pricey in Vietnamese standard, but not our most unforgettable culinary experience. 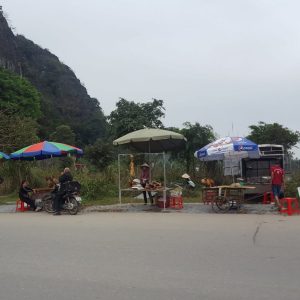 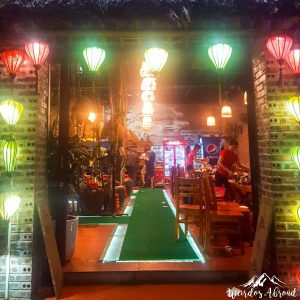 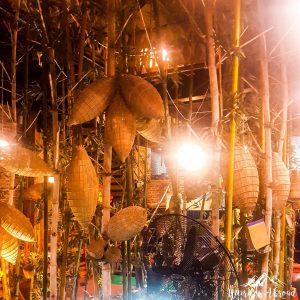 In and around Ushuaia

One wee in Ushuaia passes by quickly when you visit the natural wonders of south Patagonia and Tierra del Fuego with the magnificent glaciers and untouched territories.

END_OF_DOCUMENT_TOKEN_TO_BE_REPLACED

Cananeia is the southernmost city in the state of Sao Paulo, on an island between the mainland and a bigger island: Ilha Comprida.

END_OF_DOCUMENT_TOKEN_TO_BE_REPLACED

The Komodo Dragon, a must-see in Flores Islands

The Komodo Dragons are reptiles that can be found in the Komodo National Park. The park is comprised of multiple islands such as Komodo Island, Rinca Island and Padar Island.

END_OF_DOCUMENT_TOKEN_TO_BE_REPLACED

Tulamben, diving at the bottom of a volcano

Tulamben is a very small village on the East Coast of Bali, just North from Amed. We arrived in this village for diving but also because it is near Amed, heading for Gili islands.

END_OF_DOCUMENT_TOKEN_TO_BE_REPLACED

Pai canyon is a geological formation of red sandstones offering a picturesque landscape. You can walk on top of these cliffs and climb your way from one to the other.

END_OF_DOCUMENT_TOKEN_TO_BE_REPLACED

The hike to Mae Yen waterfalls is a relatively easy hike to do on your own if you would like to spend one day in nature once in Pai. It is really not crowded so you can expect to enjoy …

END_OF_DOCUMENT_TOKEN_TO_BE_REPLACED

The first time I heard about Pai was when I was preparing for this trip. I came across a picture of Pai Canyon (see related article) as part of a list of “places not to miss off the beaten track”.

END_OF_DOCUMENT_TOKEN_TO_BE_REPLACED

In and around Chiang Mai: Bhubing Palace

Bhubing Palace was built to be the residence of the Royal Family and their guests during their visits in Northern Thailand. It was built in 1961

END_OF_DOCUMENT_TOKEN_TO_BE_REPLACED

In and around Chiang Mai: hiking to Doi Suthep

Doi Suthep is a very sacred temple who shares its name with the mountain it is on. It is located about 15km from the center of Chiang Mai.

END_OF_DOCUMENT_TOKEN_TO_BE_REPLACED

In and Around Chiang Mai: one day with elephants

A day in sanctuary to meet and interact with elephants and even better: elephant babies! An amazing and unforgettable experience in Thailand that should not be missed…

END_OF_DOCUMENT_TOKEN_TO_BE_REPLACED

Cruising the Mekong from Laos to Thailand!

As we were particularly interested in visiting the Northern Thailand, our next destination was Chiang Mai, Thailand. Luang Prabang has been eventful and our heart is now full…