Réunion Island (or La Réunion in French) is an island in the Indian Ocean, east of Madagascar and South Africa. The island is an overseas region and department of France (department 974 to be more exact) which means that they are part of Europe and they use Euro as their currency. It was previously called Île Bourbon when the French East India Company first set foot on the island. 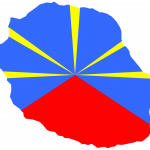 The flag of Reunion island is just a state flag (overseas region) and the national flag is actually the flag of France. The flag depicts the volcano of Fournaise (2,632 m), decorated with sun beams behind.  Many public buildings and city councils have chosen to add this flag to their decoration, but it is not an official flag.

The flag was created in 1975 by Guy Pignolet, but it really started to be promoted once the “Vexillological Association of Réunion” chose it in 2003 to represent Reunion island. The flag is called Lö Mahavéli and is widely spread on the island.

The island of Réunion was first discovered by Diogo Fernandes Pereira, who stumbled upon the island accidentally. He named it ilha de Santa Apolónia (in honor of the St. Apollonia whose day it was, February 9, 1507).

Reunion Island assumed its current name in 1793, in reference to the joining together (French = réunion) of the General Assembly of the Marseilles Fédérés and the Paris National Guard on the occasion of the march on the Tuileries Palace the previous year: the revolutionaries thus erasing the memory of the monarchy. In 1806, under the rule of the Empire, it assumed the name of Bonaparte, before passing under British rule in 1810 and then given back to the French under the Treaty of Paris (1814) when it once gain assumed the name Bourbon Island. In 1848, it once again became Reunion Island.

Is Reunion Island part of the EU?

Yes, Réunion is the outermost region of the European Union and, as an overseas department of France is therefore path of the EU.  In fact, the island is the only European region in the southern hemisphere.

Does Reunion Island have an active volcano?

How big is Reunion Island?

The island of La Réunion has a population of 850.000 and an area of 2.512 km². An interesting fact is that its greatest diameter measures 70 kilometers (roughly 43 miles).

END_OF_DOCUMENT_TOKEN_TO_BE_REPLACED

Cananeia is the southernmost city in the state of Sao Paulo, on an island between the mainland and a bigger island: Ilha Comprida.

END_OF_DOCUMENT_TOKEN_TO_BE_REPLACED

The Komodo Dragon, a must-see in Flores Islands

The Komodo Dragons are reptiles that can be found in the Komodo National Park. The park is comprised of multiple islands such as Komodo Island, Rinca Island and Padar Island.

END_OF_DOCUMENT_TOKEN_TO_BE_REPLACED

Tulamben, diving at the bottom of a volcano

Tulamben is a very small village on the East Coast of Bali, just North from Amed. We arrived in this village for diving but also because it is near Amed, heading for Gili islands.

END_OF_DOCUMENT_TOKEN_TO_BE_REPLACED

Ubud: the spiritual heart of Bali

Ubud has always been a center of attraction for those who want to experience the balinese culture. It got even more famous after the release of the famous movie “Eat, Pray, Love” in 2010.

END_OF_DOCUMENT_TOKEN_TO_BE_REPLACED

While this was Silviu’s first time in Bali, it was my third time here. I never felt in love with Bali, although I enjoyed some parts of it. But I wanted Silviu to experience the buzz behind the mystical Bali before it is too late.

END_OF_DOCUMENT_TOKEN_TO_BE_REPLACED

We spent six full days in Yogyakarta, and took the opportunity to have some rest and visit some of the temples in a rather slow paced manner.

END_OF_DOCUMENT_TOKEN_TO_BE_REPLACED

Actually, both names are accepted: Koh Tao and Ko Tao as well. It is a small island in the golf of Thailand located north from Koh Samui and Koh Phangan. It used to be …

END_OF_DOCUMENT_TOKEN_TO_BE_REPLACED

Today you cannot speak of Penang, and Georgetown in particular, without mentioning street art as the walls of the old city are covered with amazing, funny, creative pieces of street art. However it has not always been the case!

END_OF_DOCUMENT_TOKEN_TO_BE_REPLACED

Hiking from Penang Hill to the Botanical Garden

We did not leave Penang without visiting Penang Hill. We were not sure what to expect but decided to take that opportunity to get out of George Town for a little hike.

END_OF_DOCUMENT_TOKEN_TO_BE_REPLACED

The city of George Town is located on Penang Island, and it is Malaysia’s second most populous city with a population of approx. 700.000 people, while the whole island has…

END_OF_DOCUMENT_TOKEN_TO_BE_REPLACED

From Koh Tao, Thailand, to Penang, Malaysia by Train

Our time in Thailand has been amazing, from the hiking in Pai, the cooking class in Chiang Mai to the beautiful diving in Koh Tao…